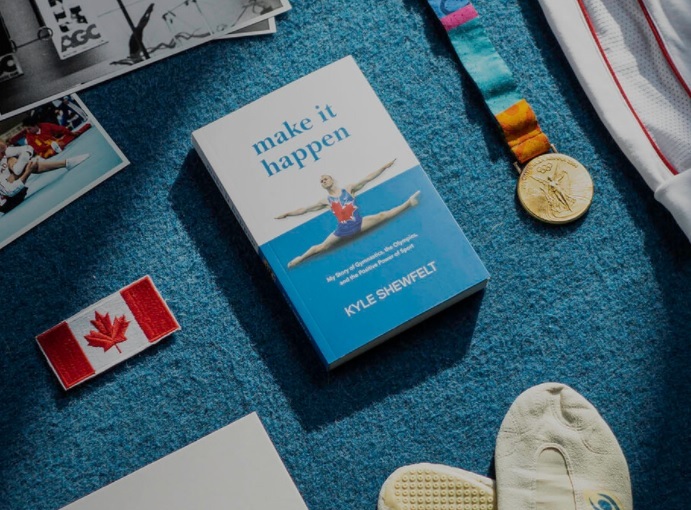 3-time Olympian and Floor champion — Kyle Shewfelt — has finally released his biography. He’d been working on it since 2004.

A great read for everyone. Life lessons through sport.

He was 6-years-old. And obviously talented.

The EASY thing to do in 2004 as Olympic Champion was to retire. At the top.

BUT after a good break, Kyle decided to keep training for Beijing 2008. His 3rd Olympic cycle turned out to be the most challenging.

Changes to the Code of Points in 2006 didn’t help.

Kyle’s idol was Alexi Nemov for his artistry and style. Like Nemov, Kyle was a fan favourite.

Though I knew the story well — coaching at his club in 2004 — I was still enthralled to hear it told from Kyle’s point of view. Know that he’s very modest in this telling.

It’s well written as Kyle worked on his sports biography together with Blythe Lawrence. And had editing by Steve Cooper.

For 10 years, while one of the best in the world on Vault and Floor, Kyle was the most consistent. The more pressure, the more likely he’d HIT.

Today Kyle Shewfelt is a public speaker, broadcaster, Gym owner and father who believes in “optimism and the power of a high five“.

I’d recommend the audio version, as it’s read by Kyle himself.

Alternatively, you can buy a personalized signed copy online. An ideal gift.

Listen to a new interview with Kyle. It starts 1 hour 18min into the podcast.

This week, we have a group commission from Brianna, Stephanie, Atwood, Laura, Karla, and Emma, all about [deep breath] the collective nightmare that was the 2000 Olympic Trials. We discuss: The breaking news that there actually was official selection criteria, and it was technically followed. The significance of 2000 Trials as the worst thing that has ever happened ever, the controversy of the selection process, the low point this represented in athlete-first commentary, and just…the Bela of it all Shannon's comeback What if Atler had been able to compete on the "new" vault? The way the commentators talk about Alyssa Beckerman The infamous Rybacki fluff piece DLO + Punch front Shannon's vault injury BEIGE DRAPES Steve Nunno's performance piece The Moceanu sadness forest Why they selected the team they did, and was it the right call? JOIN CLUB GYM NERD Join Club Gym Nerd or buy a gift membership for access to Behind the Scenes episodes. Behind the Scenes: Rodeo Exercise Machine Behind the Scenes: Adventures in Crying at Disneyland Behind the Scenes: Kensley's Wedding Behind The Scenes After Olympic Trials We Have Olympic Teams! Olympic Trials Day Two for Men & Women Live From Olympic Trials: Men & Women Day One Buy our awesome clothing and gifts here. We have masks too! And Pride gear! RELATED EPISODES The History of Olympic Trials Controversies Shannon Miller Shannon Miller Part 2 Vanessa Atler Jamie Dantzscher How to Stage a Gymnastics Protest Tokyo Olympics Recap No No Nunnoisms

One thought on “Kyle Shewfelt – make it happen”