As reported to you by email message on Thursday, December 3rd, Windsor Vistas coach and NCCP Facilitator Michael Outram recently sustained serious neck injury while he was involved in a personal activity at a gymnastics club in Michigan.

Gymnastics Ontario has been in touch with Michael’s family and here is the latest update:

• Michael has been moved to Windsor’s Hotel Dieu Hospital

• Members of Michael’s family are posting information on Facebook

• According to his sister, Melynda, Michael has a bit of movement in one of his legs. They are very appreciative of the support they have been receiving.

Our thoughts are with Michael and his family at this time.

Mike was interviewed again today on the A Channel at 6pm tonight.

In an article in the Windsor Star he explains exactly what happened:

… “I did a half-in, full-out, and I hit the bottom of the pit, which isn’t good, I’m about two inches shorter,” the 43-year-old with the heart of a kid joked during an interview from his bed at Hotel-Dieu Grace Hospital Wednesday. He said he never lost consciousness. “I didn’t even lose my gum.” … 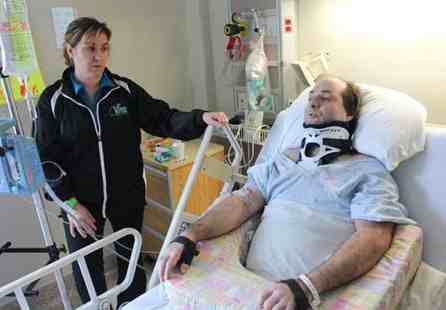 His spirits are high. And some movement has come back in both legs. Fight on, Mike.