I weary of the comments we hear every time I bring up the issue of underage Chinese gymnasts:

They are innocent until proven guilty!

You bash the Chinese because you wanted the American gymnasts to rank higher!

Not true. I bring up the issue because it is so unfair to those gymnasts disallowed to compete at the Olympics due to their age. It’s a big competitive disadvantage for those majority of nations that abide by the age rules.

I’m certain that Dong Fangxiao and Yang Yun were both underage at the 2000 Olympics. Both admitted it.

Yet the FIG Disciplinary Commission has still not ruled on those charges.

I’ve emailed a link to this newspaper article to that Committee. In it, Dong’s husband admits she was underage at the Sydney Olympics.

One of the gymnasts at the centre of an Olympic controversy is now in New Zealand and is looking to further her coaching career in Waikato. 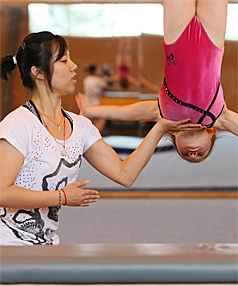 Dong Fangxiao, who was part of China’s bronze medal-winning team in 2000 in Sydney, isn’t assured of keeping her Olympic medal but is keen to help New Zealand gymnastics. She is now living in Hamilton after moving in June this year to study English at Wintec, following her husband Li Te, who studies at Waikato University.

But the International Gymnastics Federation is still investigating the eligibility of Dong and fellow Chinese gymnast Yang Yun at the 2000 Games, where they were thought to be underage.

Gymnasts must be at least 16 by the end of an Olympic year. Dong’s official birthdate is listed as January 23, 1983, but the federation said accreditation information for the Beijing Olympics, where Dong worked as a national technical official, listed her birthdate as January 23, 1986, which would have made her 14 in 2000. …

Li, whose English is much better than Dong’s, told the Waikato Times that Dong was born in 1986 and turned 23 in January this year, making her underage at Sydney. But he said she was cleared of any wrongdoing and the “investigation has already passed”. …

Did Dong’s husband misspeak too?

The minimum age rules are not enforceable. And likely do little to protect young athletes.

The best solution for FIG would be to drop the age requirement.

Most coaches would agree with that, including Valeri Liukin

More controversial is what to do about the 2000 Olympic results should the FIG finally admit the obvious?

I don’t blame Dong Fangxiao. She should not be punished in any way. But the Chinese Gymnastics Federation should be punished retroactively.