… A SIX-year-old Tasmanian boy has accidentally hanged himself after getting entangled in a clothes line while jumping on a trampoline.

Police said the boy was using a trampoline placed under a clothes line in the backyard of his New Norfolk home, north west of Hobart, about 11.30am today.

As he jumped, the strap of his bicycle helmet got caught on the nylon rope of the clothes line and tightened around his neck.

The clothes line appeared to have swung away from the trampoline, leaving the boy suspended and unable to free himself, police said.

Attempts to resuscitate him were unsuccessful and he died at the scene.

Condolences to the family.

… On July 1st I was at a big house party with a TERRIBLE backyard trampoline. Six or eight kids on it at a time. Yet I made no attempt to police it. Or “inform” the parents of the dangers. 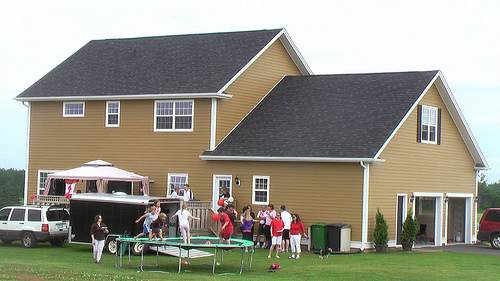 If I was King of the World I would ban backyard trampolines. Since I’m not, I’ll have to bite my tongue every time I see one in a backyard.